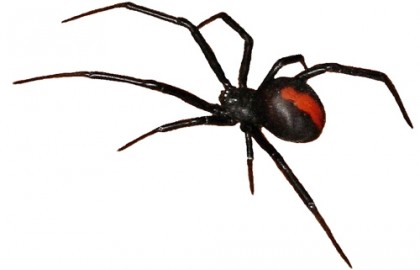 There are many different types of spiders in Western Australia and very few are harmful to humans. Spiders benefit our environment by consuming insect pests – but that doesn’t mean we want them to bother us or settle inside our homes!
WA redback spiderHere’s a rundown on the most common spiders you’re likely to encounter in and around your home and garden in Western Australia, particularly Perth and Ellenbrook.

Got a case of arachnophobia? No need to read on.

If you’re happier living in blissful ignorance because the thought of these eight-legged monsters is just too much, then there’s no need to keep reading. Simply get in touch with Di Sole Pest Control, and Alex will take expert care of your home, so the only web you’ll need to be involved in is the world wide one.

Ever wondered why you might fear spiders so much? Here The Conversation looks into why. Turns out, it’s common, and perfectly understandable.

Size: Body is 2-10mm, with legs up to 50mm long
Let’s start out with the friendliest of the bunch. These guys are world-famous for their spindly legs and tiny bodies. You’ll often find them in the home, their thin webs dangling from behind doors or in hard-to-reach places high up near the ceiling. The webs are not used to trap prey, they are simply the spider’s home (and amazing dust-catchers, which makes them most unsightly). When prey is within striking range, the daddy long-legs will rush over, bite it, then settle in for a nice meal. 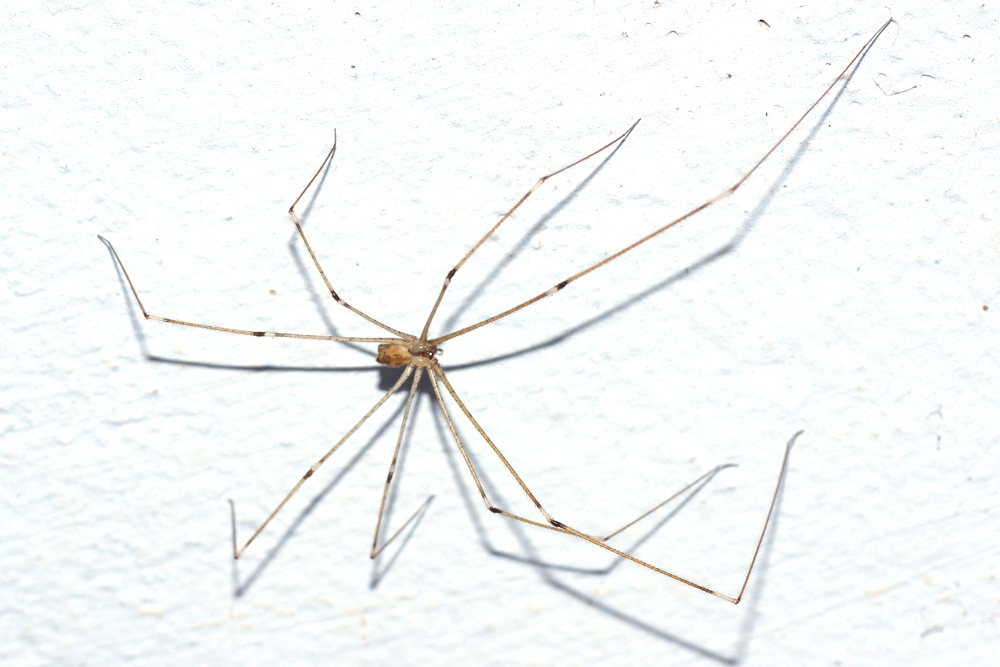 Fun fact: Although a daddy long-legs' venom is toxic, their miniscule fangs are not able to penetrate human skin. Even if they could, the amount of venom each spider has is so little, it would have no effect.

Size: Females have a body length of up to 10mm
The redback spider was named as such because of the red stripe visible on its spherical-shaped abdomen. The female spiders have a red stripe (although can sometimes be all black), while the males are smaller and usually a dark brown colour. They nest in dry, sheltered areas – like around the base of your downpipes, the undersides of outdoor chairs and tables, and in boots you might leave outside. A redback spider’s web may look messy to the human eye, but in fact it’s carefully calculated to trap prey, complete with trip wires to sound the alert.
Redbacks are resistant to cold and can survive winter but are most active during the summer months – when we are also out enjoying the outdoors.
They can potentially be very harmful to humans, so if bitten, you must seek medical attention. Symptoms will include pain around the bite site, which will travel up the affected limb, swelling around bite, nausea/vomiting may occur in cases of severe poisoning. Fear not! There haven’t been any deaths directly related to the redback spider since 1956 when an antivenom became available. 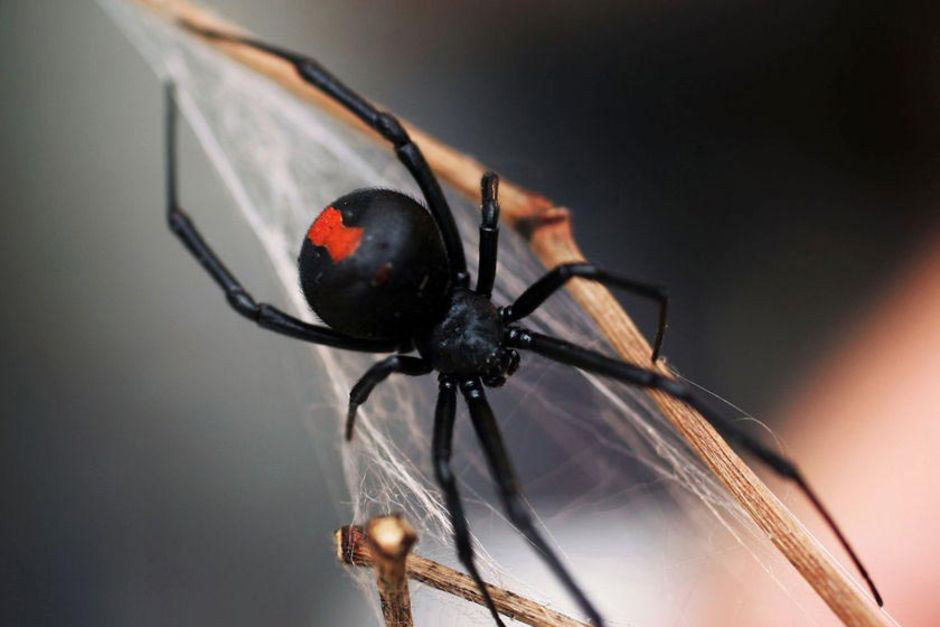 Fun fact: The males are consumed during mating – and actually assist the female in this process by putting their abdomen in contact with her mouth parts to facilitate the process. These guys are the martyrs of the spider world.

Size: Their body length is up to 18mm with a leg span of 28mm
White-tailed spiders don’t build webs, but wander around in search of prey. You might have seen some in your house in summertime. They have cylindrical abdomens with grey to black bodies, and the trademark white tip at the tip of the abdomen. Their prey is mainly other spiders.
White-tailed spider bites have received a bad rap in the media, with a number of cases of severe cases of ulceration on the skin (known as necrotic arachnidism), but this is not common. Other symptoms may include burning pain followed by swelling and itchiness around the bite area.
If you’ve noticed them lurking around your home, it’s a good idea to check bedding before going to bed, and your shoes before you put them on. It’s best not to leave clothing and other items on the floor, as this could serve as a prime hiding spot for a white-tailed spider. 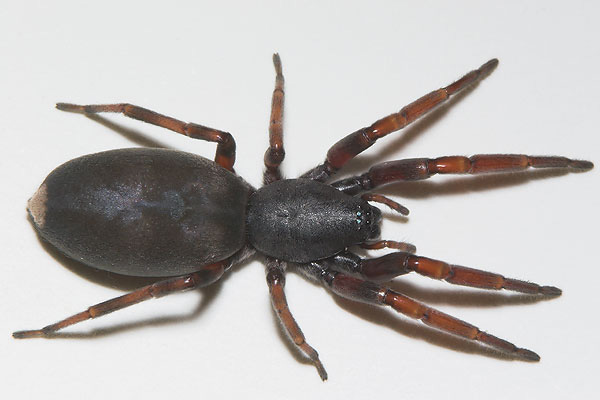 Fun fact: White-tailed spiders will cleverly imitate prey by tapping on another spider’s web then attacking the unsuspecting spider when it comes out to see what's going on.

Size: Females have a body length of up to 18mm, with a 30mm leg span.
They are also known as window spiders due to their annoying tendency to nest in window frames, but who could blame them – a room with a view! You’ll notice their untidy webs have one or more funnel-shaped entrances which lead to a safe spot where the spider hangs out. They can bite humans, which can be very painful and cause nausea, sweating and vomiting. In rare cases, necrotic skin lesions have been reported in the case of multiple bites.
The males are consumed during mating – and actually assist the female in this process by putting their abdomen in contact with her mouth parts to facilitate the process. These guys are the martyrs of the spider world. 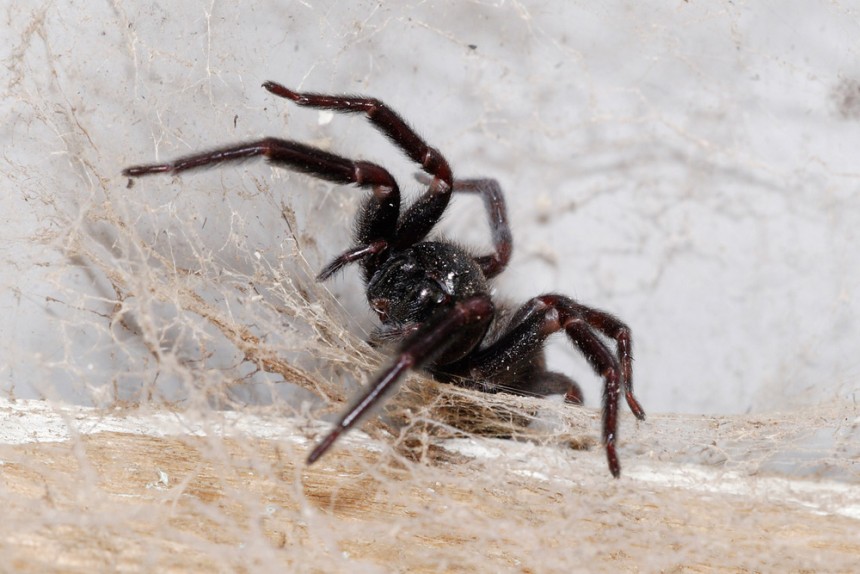 Size: Females have a body length of up to 20mm, with a 150mm leg span
These guys are the real deal, hairy AND scary. They are known for their very particular form of movement – they scuttle sideways in a crab-like fashion. Their bodies are quite flat and their legs, instead of bending vertically in relation to the body, twist so they spread forwards laterally. They don’t spin webs, but can be found outside under the bark of trees or under rocks and logs on the ground. Unfortunately, they also like to venture inside the home.
Huntsman spiders are nocturnal creatures, and will run after their prey, pouncing when they’re within range. While they might give a painful bite to humans, they are considered harmless. This of course doesn’t take into account the psychological shock you might experience when you see their eight eyes staring back at you when you’re trying to relax on the couch of an evening! 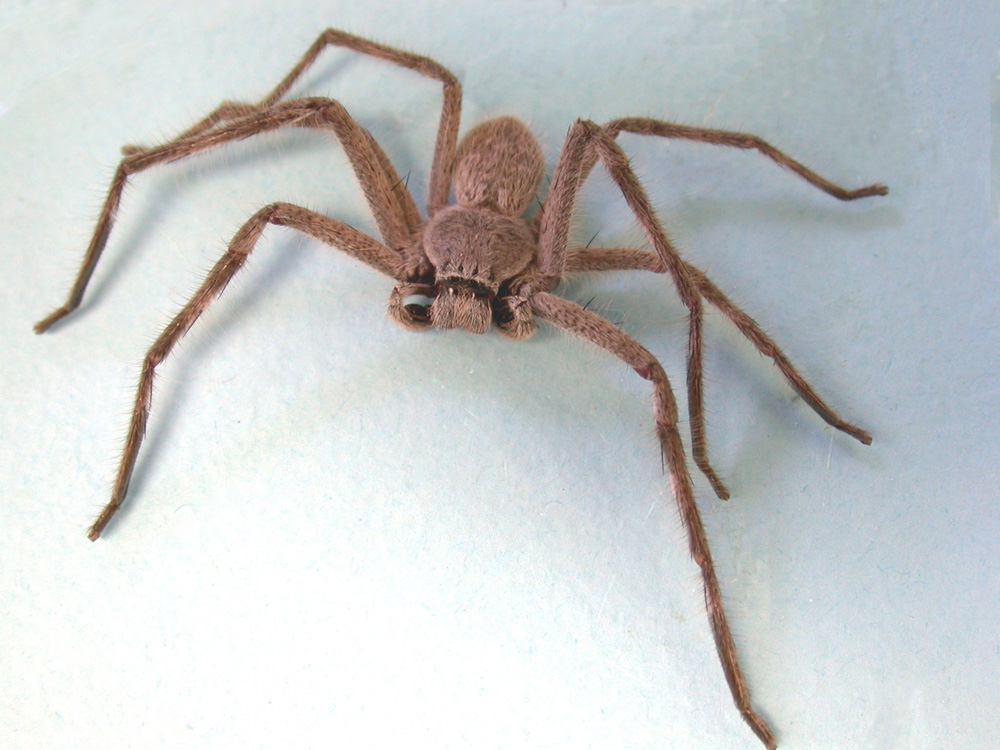 Fun fact: There is nothing fun about a huntsman spider.

Size: Their body length is up to 35mm
They are often encountered in the garden, sometimes in burrows or wandering about in search of prey. They have a tendency to seek shelter indoors in the cooler months. Wolf spiders have large eyes which help them to hunt in the nighttime. Most are brown-grey with variegated patterns on them, but do vary as they camouflage themselves for protection. They are not dangerous to humans, apart from one species of wolf spider which can give a painful bite, resulting in blisters and infection. So be sure to always wear gloves while gardening! 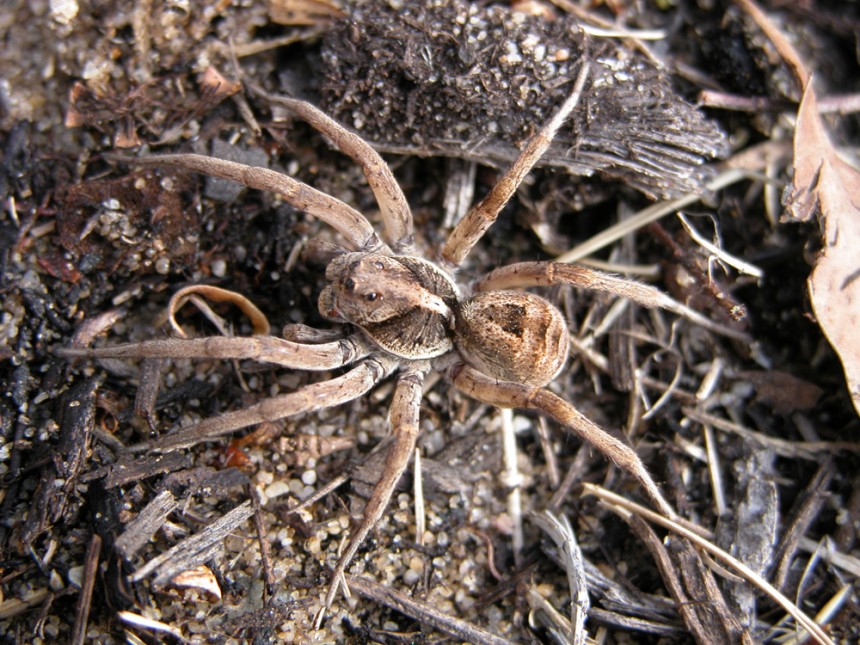 Fun fact: Wolf spiders have a unique way of carrying their eggs: a female will attach her egg sac to the end of the abdomen, so she can carry her unborn young everywhere with her.

Size: Their body length is up to 30mm
These guys have downward-pointing fangs instead of pincer-like ones, which explains why they rear up when threatened. They are not aggressive and spend most of their lives in their burrows – hence their name. If you don’t go knocking, they won’t bother you. However, not all trapdoor spiders make a door for their burrows. In any case, the entrances to their burrows – in trees or on the ground – are almost undetectable.
During mating season, the males wander around in search of a mate – which is generally when you might see one out and about. They eat insects, other spiders, and some small animals. 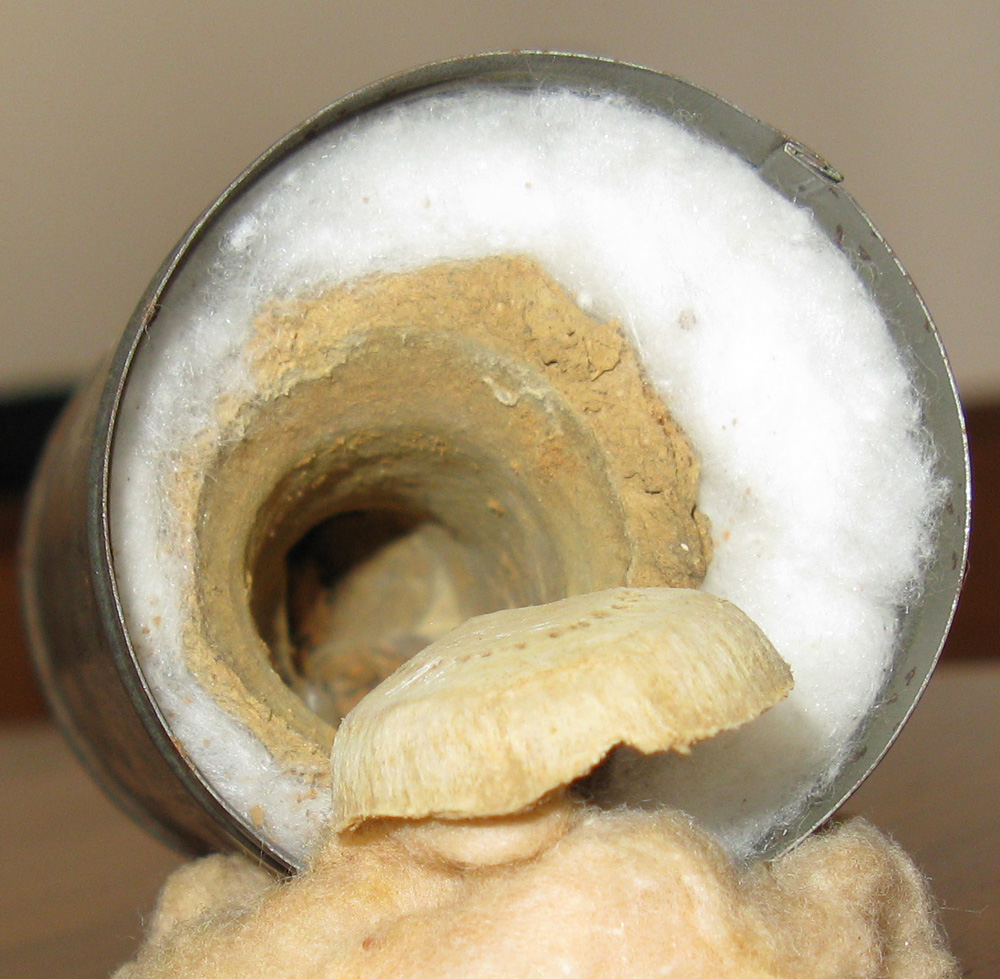 Opened trapdoor spider burrow to show interior. The punctures on the lid show where the spider had gripped. Source: JonRichfield on Wikipedia

Fun fact: Trapdoor spiders have long lifespans, and females may live up to 20 years. Wow!

Size: Females have a body length of up to 25mm.
Unsurprisingly, you’ll find garden spiders in . . . your garden. They are attracted to eaves, sheds, trees, and other structures in your garden like arches. Garden spiders are responsible for all those pesky (but beautiful) wheel-shaped webs you get your face caught up in while walking through your garden. Generally when this happens, the spiders will drop to the ground, run off and hide – bites are very rare indeed.
Garden spiders come in a variety of shapes and sizes, but will generally have red colouring on their leg joints and can change colour to match their surroundings. 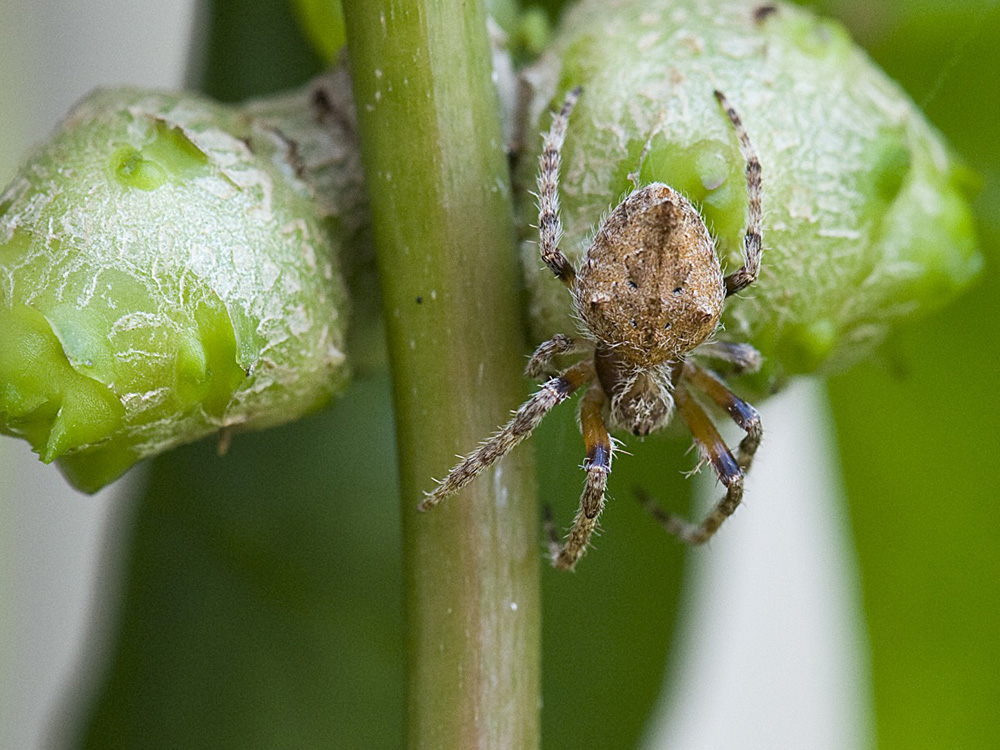 Opened trapdoor spider burrow to show interior. The punctures on the lid show where the spider had gripped. Source: JonRichfield on Wikipedia

Fun fact: They're clever little things. When conditions are not good for catching flying insects, they won't waste time building a web. When conditions become favourable, they'll make a web in around 45 minutes, settle in, and wait for their meal.

How to prevent spider bites

Obviously it’s best to avoid being bitten by a spider, rather than having to worry about treatment after the fact.

Here are some handy, common-sense tips:

If this article has but whet your appetite and you’re a spiderman – or woman – keen to know more, there are plenty of online resources to sate your curiosity. You can start with the Department of Agriculture on west australian spiders. If you find an unidentifiable unmentionable at your place, send them an email, and their team of experts will assist with an identification.

The best option of all?

Call in an expert – contact Alex now or call him on 0419 800 237 for an expert pest control service servicing Perth and Ellenbrook.